“a compelling portrait of a community with a crisis of identity…” 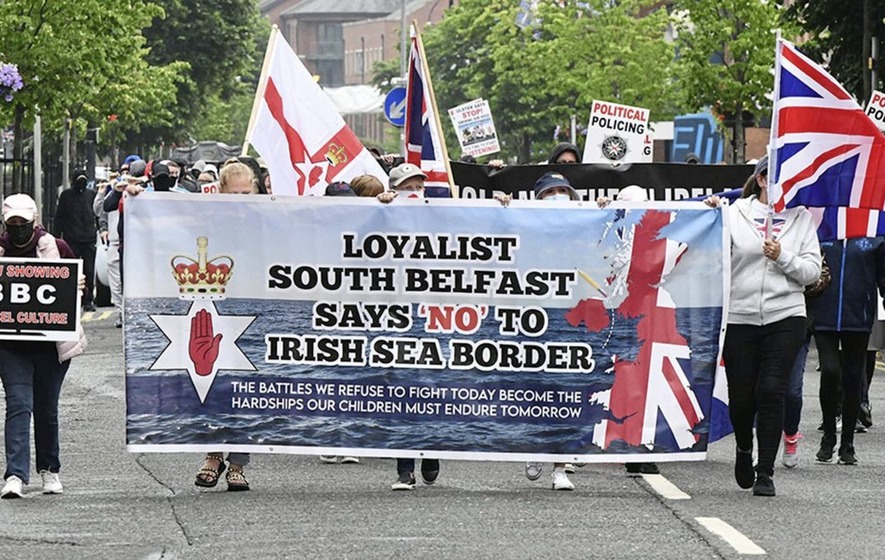 SUSAN McKay’s new book, Northern Protestants: On Shifting Ground, should be compulsory reading for both sides of the divide here: for nationalists, who only see their stereotype of northern Protestants confirmed by every utterance of unionist politicians; and for unionists also, who don’t realise those same politicians don’t represent the range and depth of different views in their own community which McKay has made available to readers.

In many ways the book is a continuation of her acclaimed 2000 book, Northern Protestants: An Unsettled People, which was updated and re-released in June.

For On Shifting Ground, McKay travelled widely around the north gathering dozens of interviews which she has organised into four sections geographically: the Far North, Belfast, Mid-Ulster, the Border. Each section has a wide assortment of individuals, some well known, others not.

There are pastors, politicians, paramilitaries, poets, business entrepreneurs, community workers, farmers, army veterans (of whom there are thousands in the north), oddballs and more.

Somehow, McKay managed to persuade them all to speak to her candidly about themselves and an array of topics, but almost always returning to the place and state of Protestantism and unionism in the north today and the reasons why they have arrived where they are.

Alongside and interspersed with the interviews are McKay’s own penetrating insights about Protestant and unionist society here.

Her writing is lucid and spiced with humour and wry asides. She often lets characters ridicule themselves out of their own mouths. There are some great lines.

Dee Stitt, convicted armed robber, UDA leader and erstwhile community worker, told her to do research on him.

“Google me,” he said. “There’s reams about me in the media” accusing him of all kinds of crime. “There’s no evidence for any of it”, he says.

McKay adds: “Loyalists are certain that but for the media their goodness would shine.”

However, if there’s one theme dominating the book it’s summed up in its title, which is taken from a remark by a local poet, Jean Bleakney, whose family is from Garrison and who grew up in south Armagh and Newry.

Bleakney laments their decline in Newry, with a population of 27,000-odd but a dozen Protestant children in each school year. Bleakney has a sense of continually being driven back which she said led her to join, “the panicked surge of people who voted DUP” in 2017: “I felt the ground shifting… there needed to be a steadying of unionism.” Before that she voted SDLP and before that UUP.

Others are more explicit in their search for identity. Dawn Purvis, former PUP leader, says the future doesn’t “bode well for unionism”. She thinks there’ll be a border poll: “If we have Scotland for the Scottish, England for the English, Wales for the Welsh, that leaves the last remnants of the Brits in Northern Ireland. What does it mean when that happens for people who hold onto this notion of identity they can’t explain?”

Most of the interviewees share this search for identity and have no political home in the north or any political party they can support. Sarah Creighton, a blogger and political commentator, is one.

“When I go to Britain, the ‘mainland’, I don’t fit in. They think I’m a ‘paddy’… I don’t see myself in the Republic… there’s no place for me there.” Despite all, she says she belongs here.

Rebecca Crockett from the north-west says, “I’m just from the border really. I don’t have any connection to England and I don’t really have a connection to Ireland… I wouldn’t say I’m loyal to a flag or a government or anything.”

Throughout the interviews there’s a search for leadership, direction. The unionist middle-class comes in for severe criticism for opting out.

McKay cites John Hewitt’s poem The Coasters for “the placidity and complacency of middle-class unionists in the years leading up to the Troubles… prospering, voting without feeling the need to contribute to political thinking”: in Hewitt’s lines, “The government permanent, sustained/ by the regular plebiscites of loyalty.”

Bill Wolsey from Ballysillan – successful entrepreneur, owner of The Merchant Hotel, son of traditional socialist Methodists – was one of the few who spoke out against the DUP’s support for Brexit, “because I could see nothing but danger for Northern Ireland”.

Wolsey says, “the middle classes here went off to play golf in 1968 and never returned. Anyone who put any thought into it knew that compromise was the way forward.”

In a powerful epilogue McKay sums up the state of unionism, “struggling with a crisis of identity”. How to resolve it? McKay points to the fate of any unionist who tries.

She cites a BBC interview Arlene Foster gave earlier this year in which she said one of unionism’s problems was that when it was “in difficult circumstances… they turn in on themselves and people start to look for Lundys to blame.”

As McKay says: “She knew. The party was looking for someone to blame. She was the obvious candidate.” Which leaves unionism no further on.

This is an important book, a register of unionist and Protestant opinion and thought which, like her earlier work, provides a picture that will be examined and consulted by historians in the future.

McKay strives successfully to be fair, just and all-encompassing of the variety of views and attitudes out there. She is insightful and perceptive. The picture presented, apart from a few interviews, is sad and depressing, portraying a leaderless, directionless, lost tribe.

The disenchantment, the emphasis by many interviewees on bibles, symbols, nostalgia, the search for recovery of lost time, is reminiscent, not of Proust but of the Native American Trail of Tears. You should read McKay’s book.